Two visits to see the amazing exhibition at the Towner in Eastbourne. Lovely wood sculptures by David Nash . Marvellous.

Went to see the new exhibitions at Hastings Contemporary. I was glad to see my favourite picture by Victor Willing (a self-portrait lent by Pallant House – see it here – where I’ve admired it often) because I can’t say I liked most of his work on show. However the latest roomful by Quentin Blake were delightful as ever.

Going for total immersion in Gauguin Portraits at present  : the exhibition, back-up lectures, YouTube intro, the very old film called Gauguin… Saw some images in the exhibition I’d never seen before in books etc., and it’s interesting to see very large versions on a big screen for the detail one can’t really see in exhibition light.

More portraits in the recent Royal Academy exhibition of paintings by Helene Schjerfbeck  . Wonderfully spacious rooms and the opportunity to see her series of self-portraits detailing herself aging and ending with one very reminiscent of a death mask. Also lovely quiet still lifes in subtle near neutral colours.

To Hove Museum to catch a second look at the tiny Friedrich Nagler sculptures I saw at Pallant House a while ago. It was sad they didn’t look half as impressive because of poorer setting and layout. Just goes to show presentation is half the battle!

Womens’ work Saw work made by interesting craftswomen dating from between the World Wars at Ditchling Museum of Art & Craft. It included weaving, ceramics, jewellery and dressmaking. The museum’s permanent exhibition is always good to revisit too and the shop is a treasure trove. (Gluten-free brownies deserve a star as well!)

An outing to Tate Britain to see the huge exhibition of William Blake’s work. It was crowded and had very subfusc lighting in some areas to protect the items. So I didn’t manage to get close to everything. But by the end rooms – last chronologically too – the numbers had thinned out and the pictures were bigger. The detail of the work was quite overwhelming – just so much. https://www.tate.org.uk/whats-on/tate-britain/exhibition/william-blake-artist

Away to distant edge of London (to me) in Walthamstow to the William Morris Gallery which is a lovely place. Went specifically to see Madge Gill’s work which was fascinating. The picture on the site shows one of her lengthy pieces of canvas or calico pinned up outdoors just to fit it in a photograph. See http://madgegill.com/drawings for more. Her embroideries can be found with a search.

The main contents of the gallery about William Morris was good to view again too.

At the National Gallery I enjoyed this year’s Take One Picture. It shows some of the responses from children to Joseph Wright of Derby’s An Experiment on a Bird in the Air Pump. The children are lucky to have teachers who lead them to such varied and imaginative ways of looking at art and experimenting with new materials. https://www.nationalgallery.org.uk/exhibitions/take-one-picture-2019/works-in-the-exhibition

https://www.nationalgallery.org.uk/exhibitions/bartolome-bermejo features some of the very few known works by this artist of the 1400s. One wonders where all the many other paintings he must have done went to. No one could have attained such excellence without much practice.

Got to Pallant House in Chichester to see a huge collection of Ivon Hitchens’ work (to add to the flowers seen recently at the Garden Museum) and it was well worth the trip.

The Towner gallery in Eastbourne has an interesting selection of work too. Fascinating for spotting where the shadows are coming from but I’m afraid I would not have guessed that it explores notions of fertility, land, resistance, Afro-diasporic spiritual aesthetics and practices.

I liked seeing the curators’ choices of work from the Towner’s collection as well.   Long may it be possible to see the variety of images this gallery shows regularly for free!

1. And the Hastings gallery has been renamed Hastings Contemporary after Jerwood took back its name – and its pictures. See https://www.google.com/search?client=firefox-b-d&q=jerwood+gallery+hastings+dispute &nbsp; Fortunately Quentin Blake is still to be seen, and some David Bombergs featured alongside an artist I have never been able to ‘understand’: Roy Oxlade. https://www.hastingscontemporary.org/exhibition/roy-oxlade/

The set of large blue boats by Tal R were a nice blue.

2.  Weavers of the Clouds  was interesting though the lack of labels regretted by me. Even if a very informative booklet is given with the ticket, a label is good for those without bifocals! The natural dyes were lovely colours and some of the little symbols for animals etc. delightful. 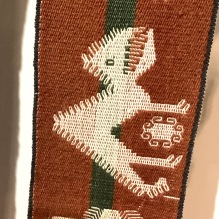 3.  Almost opposite the textile museum Peter Layton’s workshop was open and I enjoyed seeing some of the amazing pieces and watching the workers pulling red hot glass from the ‘ovens’. This is a photo I took with permission of some work by Peter Layton.

Last outing in June was to the Garden Museum to see special exhibitions of work by Ivon Hitchens  and George Rowlett   Both rich and vibrant. Don’t often seem to see Hitchen’s flower paintings. The Garden Museum is wonderfully quaint and English somehow, with neatly displayed copies of ancient pamphlets about gardening and learned treatises on plant hunters of the past.

Then – continuing the 2-for-1 theme – I went round the Sorolla works at the National Gallery and saw a special display of Sean Scully‘s work signposted  and had to see that in memory of the friend who first raved about him to me.

Had to return to Tate Britain’s Van Gogh and Britain  specifically to take another look at Harold Gilman’s An Eating House  – I hadn’t recalled what a colorist he was. Great to see the Van Goghs too of course – many only known from books – plus more of the Camden Town group of artists.

Found (well hidden!) room of just a few paintings by Gillian Ayres  – the colours online here do not do her justice. Huge – and hugely joyous.

On by boat to Tate Modern for a visit to the Natalia Goncharova exhibition which was marvellous. A wonderful mix of painting – many in gouache – lithographs, costumes – you can read the guide online. As with the Van Gogh show, it is so fascinating to see how artists are influenced by each other and are excited to incorporate and personalise new ideas.

I got to the Jerwood gallery in Hastings. Saw some old favourites on show and a new roomful of lovely Quentin Blake characters: Dedicated Readers.    Marvellous.

It’s May and I have just managed to resume visits to London after a long time.

I had to see the Bonnard show at Tate Modern and, of the short videos on Google in response to searching for  ‘Bonnard at Tate Modern’, I think this has the best colour.

Many of the images I know from books and I was glad to see some of the self-portraits again which I last saw at Tate Britain maybe in the 1990s. There weren’t many pictures in gouache this time which I seem to recall were particularly vivid.

While I have been ‘confined’ I followed two online short courses: a printing course with Linda Germain using a gelatin plate for which I used my Gelli plate. Here are a few of my tasks:

and a composition course with Anita Lehmann